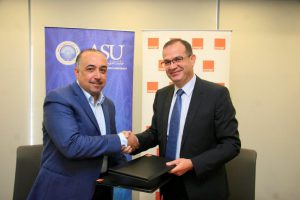 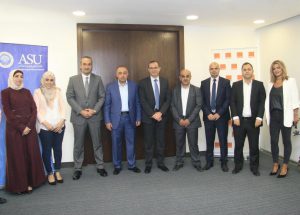 Orange Jordan recently signed an agreement with Applied Science University (ASU) to become their exclusive integrated telecom services provider. The agreement was signed at a ceremony held at the Headquarters of the company, with the attendance of the Council Vice President/ General Manager, Dr. Haitham Abu Khadija and the Chief Enterprise Officer of the Business Unit at Orange Jordan, Mr. Sami Smeirat.

Under the agreement, Orange Jordan will provide the Applied Science University with an integrated bundle of services that includes mobile lines and very high-speed internet, in order to provide a high-quality telecom system that enables students and employees to always stay connected and keep up with the digital age.

Commenting on the occasion, Chief Enterprise Officer of Orange Jordan, Mr. Sami Smeirat said: “We are very happy to sign this strategic partnership with the reputable Applied Science University, as we at Orange Jordan are always committed in being part of enhancing the quality of education given to the youth in the Kingdom, especially in this digital era that demands high-speed in performance. As the strongest provider of fast internet, we are confident that the services that we provide will make positive differences in the lives of students and will keep them always connected to all that is essential to them and to the latest technologies and developments, which is in line with our five-year corporate strategy “Essentials 2020”.

ASU’s Council Vice President, Abu Khadija in turn, said: “This strategic partnership with Orange Jordan is considered a true model of joint institutional work, which will enhance the cooperation in providing high-speed electronic services for university students and academics to enable them to research easily.

In line with its interest in delivering an unmatched customer experience, Orange Jordan is committed to take care of its growing customer base in the business and institutional sector, which includes government and private institutions and universities, as well as large, medium and small enterprises, by simplifying its wide array of telecom solutions and services tailored to meet their needs, which range from telecom services, to connectivity, to cloud computing and enterprise resource planning, as well as security and protection services 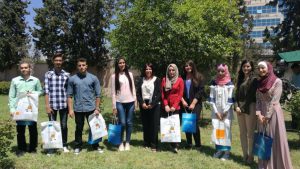 In recognition of the efforts of all Tawjihi students throughout the academic year and the achievements of top students in receiving the highest scores, Orange Jordan recently honored this year’s top Tawjihi students from all governorates and in all areas of study.

Orange Jordan presented the top Tawjihi student in each of the nine areas of study with a pre-charged Orange 15 line for five years, a prize worth JD 1,180, and a Samsung Galaxy J5 Pro from Samsung Electronics – Middle East. The awards were given to the students during the Yesed Sabahak morning show on Jordan TV.

Orange Jordan also honored the top 13 students from all governorates by giving each of them a prize valued at JD 4,180, including JD 3,000 cash and a pre-charged Orange 15 line for five years, during the Helwa Ya Donya morning show on Roya TV.

Orange Jordan Deputy CEO/CFO Raslan Deiranieh congratulated the top students on their tireless efforts that led to them achieving these outstanding results, saying: “We are happy to reward the Tawjihi students of the current academic year, encouraging them to continue being at the top of their undergraduate studies.”

Deiranieh stressed Orange Jordan’s desire to continue supporting future generations of gifted Jordanian youth, as they will lead the transition towards further growth and future development, as education is the foundation of development in any society.

Orange Jordan Marketing Director of the Consumer Unit Naela Al Daoud said that by honoring these students, a main objective of the company’s corporate social responsibility strategy, which is inspired by its five-year corporate strategy Essentials 2020, was met. Orange Jordan is committed to upholding various segments of the community, focusing primarily on education and youth, which will lead to creating more skilled and productive Jordanians, and effecting positive differences throughout society.

Orange Jordan continuously aims to develop and implement programs and initiatives that directly benefit various sectors of the community, where education stands at the forefront 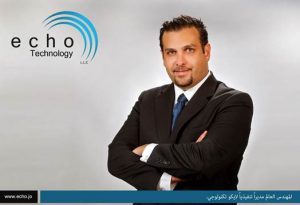 Echo Technology-Jordan has enhanced its ambitious plans, especially in the Middle East by appointing Eng. Yousef Zafer Alem as its Managing Director

The company expressed its trust in Eng. Alem and his professional qualification that is rich of related practical expertise in management and achieving success stories

Echo Technology is looking forward to Eng. Alem’s to lead the executive management to set strategic and practical plans for business development, enhance productivity, increase operational efficiency, positive power for the employees and enhance the market share of Echo Technology as a leading company in Jordan and the Middle East. 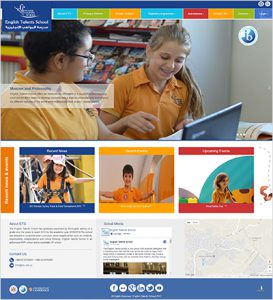 The English Talents School, which aims to develop students to have a mature understanding and respect for various world cultures while maintaining their heritage and identity, recently announced the launch of a new school website ets.edu.jo powered by ESKADENIA Content Management System (ESKADENIA® CMS).

The purpose behind launching the new website is to develop intellectual curiosity, independent thinking and communication, problem solving skills, and a desire for life-long learning enabling students to engage actively in global and local societies. In addition, the website introduces visitors to the school’s mission, offerings and overall spirit, and offers an opportunity to publish students’ work. The new website allows the school to share valuable information such as a calendar of upcoming events, latest news, and success stories of both the children and the school, etc.

ESKADENIA® CMS provides such simplicity and flexibility that allows the School’s webmasters to have full control over the organization’s web presence. It also enables them to manage the content online from anywhere, and to benefit from a wide range of rich features without the need for technical assistance or knowledge of programming languages. 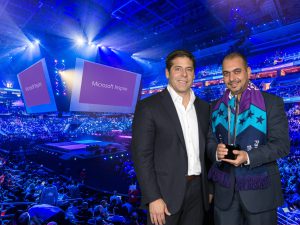 STS today announced it has won the 2017 Microsoft Country Partner of the Year 2017 Award. The company was honored among a global field of top Microsoft partners for demonstrating excellence in innovation and implementation of customer solutions based on Microsoft technology.

Upon receiving the award, STS’ Product Director- Microsoft Licensing and Training Haytham Elayyan proudly claimed: “Being named Microsoft’s top partner in Jordan is a proud distinction that reaffirms our standing as the trusted choice for partners and customers alike for the past 28 years. Having won the award last year, it fills us with great satisfaction to win it again, as it indicates the strength of our STS team, and our determination to deliver the most value to our customers.”

Alian continued by saying: “At STS, we are committed to adopting the highest professional and quality standards, and continuously strive to effectively cater to our clients’ evolving needs. Receiving this prestigious accolade is further testament to our advanced market position as a pioneering regional company.”

Awards were presented in several categories, with winners chosen from a set of more than 2,800 entrants from 115 countries worldwide. STS was recognized for providing outstanding solutions and services in Jordan

The Microsoft Country Partner of the Year Awards honor partners at the country level that have demonstrated business excellence in delivering Microsoft solutions to multiple customers over the past year. This award recognizes STS as succeeding in effective engagement with its local Microsoft office while showcasing innovation and business impact, driving customer satisfaction, and winning new customers.

“We are honored to recognize STS of Jordan as a Microsoft Country Partner of the Year,” said Ron Huddleston corporate vice president, One Commercial Partner, Microsoft Corp. STS is a prime example of the expertise and innovation we see in our Microsoft partner community to deliver transformative solutions.”

The Microsoft Partner of the Year Awards recognize Microsoft partners that have developed and delivered exceptional Microsoft-based solutions during the past year.

It has to be noted that STS has already won numerous awards from Microsoft; most notably being named the Microsoft Windows Vista OEM Champion Award 2008, the Microsoft Small Business Specialist 2011, and the Microsoft Country Partner of the Year 2016 for Jordan. 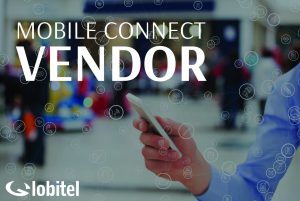 Globitel, a leading telecom and contact center solutions provider is taking another major step in its operations announcing that the company is now a GSMA certified vendor for Mobile Connect, a secure universal log-in solution.

As a new digital service and online identity, Mobile Connect simply matches the users to their mobile phone through its inherent security, allowing them to log-in to websites and applications quickly without the need to remember passwords and usernames.

Globitel CEO Sharif al-Nabulsi said the new achievement marks the success of hard work and efforts driven by the company’s efficiency, reliability and long experience in the telecom field, culminating in the launch of the new digital service.

Building on its successes, al-Nabulsi indicated that with the introduction of Mobile Connect to the markets as a solution ensuring users’ privacy and protection, Globitel is now the only company recognized as its vendor in the Middle East, standing among 15 others worldwide.

Developed by the GSMA and its operator partners, Mobile Connect can provide authentication through its logo at a number of security levels on any device (PC, mobile or tablet). The new digital service is safe, secure and no personal information is shared without permission.

Vendors are important partners in the Mobile Connect ecosystem and are highly supportive and active in the Identity program.  To reflect their value, the GSMA Mobile Connect Vendor Forum has recently been created to act as focal point and to foster faster and greater collaboration between mobile network operators. 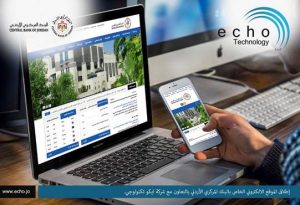 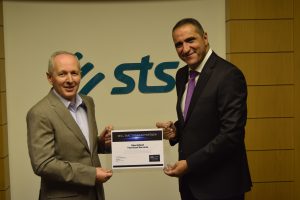 STS Named as the only Dell EMC Titanium Partner in LEVANT

STS, the leading company in providing complete all-round Information Technology (IT) solutions in Jordan and the region, today announced it has been named the only Dell EMC Titanium Partner in LEVANT region. The Titanium tier of the Dell EMC Partner Program designates partners that have capabilities and resources with expert-level certifications, making them industry experts in their designated competency. Titanium partners also have the option of embracing and supporting comprehensive solutions in the competencies of products, services and solutions. These partners can deliver complete end-to-end solutions, inclusive of services.

STS Chief Operations Officer Mr. Husam Katkhoda, proudly stated: “We are delighted and proud to achieve such a prestigious recognition and a distinctive position. Being the first and longest standing partner for Dell EMC in Jordan fills us with pride, and we remain optimistically confident in our ability to maintain the high standard that we have set along the years as we continuously strive to keep this relationship at the highest of levels for the foreseeable future.”

He also added: “This level of partnership endorses and attests the exquisite service and superior execution which customers have grown to expect from us at STS.  Striving to continue along the strategies of the past, this partnership will enable us to offer more competitive prices; easing the path for businesses to adopt the latest technologies and further grow their operations”.

“Under the Dell EMC Partner Program, our opportunity to go big and win big is greater than ever. The new Titanium Status gives us the opportunity to work closely with our top partners to meet our mutual customers’ needs in bigger and better ways” said Kamal Othman, General Manager and Regional Director, Levant region, Dell EMC. “STS has certainly earned this distinction and we look forward to an even stronger and mutually beneficial partnership moving forward.”

“Partners with the Titanium Status are some of our most strategic partners, those who have consistently supported Dell EMC products, services and solutions to the benefit of our mutual customers. As we move forward, this new status gives us even greater opportunity to provide them with the strategic support, services, and recognition they deserve, and together we’ll push the envelope even further,” said Mahmoud Abbas, Channel Sales Director for Saudi Arabia, Egypt, Levant and Libya, Dell EMC. “STS has certainly earned this distinction and we look forward to an even stronger and mutually beneficial partnership moving forward.”